Some women tend their friendships like master gardeners tend award-winning roses, cultivating them with lavish care and constant nurturing. You see these women in Facebook photos with a slew of BFFs at GNO (girls night out), arms slung around each other, smiles broadened by glasses of wine.

They have inside jokes, millions of memories, and they know each other so well they finish each other’s sentences.
They buy their GFs (girlfriends) those decorative pillows that say, “If friends were flowers, I’d pick you.”

I am not one of those women. Not by a long shot. No gift shop would ever stock a pillow with a quote that represents my approach to friendship. That’s because mine would read, “If friends were flowers, I’d kill you.”

No, I’m not the violent type. I’ve just sown a lot of friendships that briefly took root, then withered and died.

If a woman with many close and enduring GFs could be described as having a green thumb for friendship, then my thumb would resemble something that survived a close encounter with a sledgehammer.

If friends were represented by flora, then I’d be the prickliest of cacti—always thorny, rarely in bloom. 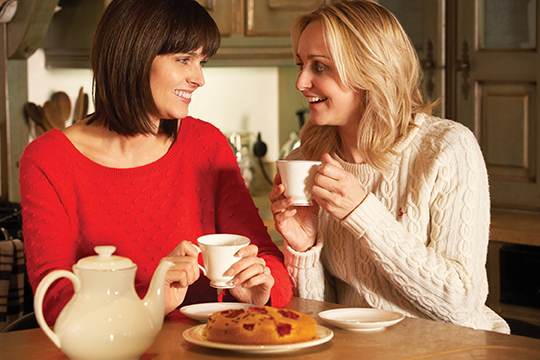 While I was pregnant with my first child, a casual work acquaintance regaled me with tales of female bonding over the raising of babies. She was an empty nester recalling motherhood with nostalgia, and instead of happily ever after, her stories ended with, “The girlfriends you raise your children with will be your friends for life.” This was repeated so often and with such conviction that I accepted it as fact.

So when my unmarried, childless and/or career-focused friends all drifted away after I came home with a baby, I didn’t bother to pull them back in. I knew I’d survive their loss because more meaningful and deeper friendships lay ahead. My children would lead me to the holy land of playgroups and playdates, where I’d meet dozens of women who were BFFs just waiting to bond with me.

True to expectations, my life as a mother became a social whirl of meet-and-greets not only at “play” this or “group” that but also at preschool pickups and drop-offs, story hour at the library, and afternoons at area playgrounds. These encounters were like speed dating—brief opportunities to see if I clicked with anyone. Unlike dating, however, children were always in the mix.

My unspoken rule, “Befriend only those moms of children your child likes,” evolved because free time was at a premium—so a mommy + mommy/child + child friendship would kill two birds with one stone. I didn’t feel I had the luxury to indulge in relationships with women I actually liked if our kids didn’t get along.

In hindsight, I later understood these relationships to be friendships of convenience. We were over at each other’s houses already for our kids’ playdates, so why not socialize as well?

But as any mother will tell you, the problem is that children’s friendships are frequently short-lived and hinge on who’s in their class or on their soccer team. Believing our kids will “be besties forever,” the mom friendships we forge are often abruptly severed over hurt feelings between our offspring that are never patched up, leaving us adults uncomfortable. This uneasiness is often compounded by TMI—a premature desire to accelerate closeness by revealing too much too soon.

In my case, I felt like an unpaid therapist carrying a burden of confidentiality I hadn’t wanted to take on in the first place. I kept my mouth shut, but I couldn’t erase the knowledge.

One mother confessed her own mother was a closeted lesbian. Another revealed her well-respected husband was a high-functioning pothead. A third admitted to cheating on her spouse with a male babysitter she took on vacations with her family. And there were other lurid tales as well. After a while it was tough to go to a PTA meeting and look anyone in the eye.

I soon learned to tamp down my understanding and compassion to discourage these confessions from women I barely knew.

Still looking for that perfect someone, I began to widen my searches, casting beyond the mothers of my daughters’ best buds to include mothers in the same Brownie troop and dance class. These friendships of proximity required me to put out feelers like a vigorous plant trying to root in new soil. Few ever found fertile ground. I was the unconventional mom who was a little too earnest, too feminist and too focused on her career.

This isn’t to say I was a total loser and an embarrassment to my daughters. Over a 13-year period I met plenty of moms for coffee and lunch and drinks, but they came and went. None of them ever stuck.

I didn’t need new math to understand that (child + mother) + (child + mother) had failed to add up to a friendship equation that equaled my happiness. I had spent too many years solving for the wrong problem, mistakenly believing that having children in common was essential to making friends as mothers. But in most cases that was the only interest we shared. That’s when I began to realize the importance of friendships of choice.

Syracuse is a small city, and when you do the same thing year after year, you see the same people. For me, it was a ginger-haired artist I kept running into at craft festivals, art events, antique shows and trunk sales. She was outgoing and funny, and whenever we stood in line or sat next to each other, we’d talk about our lives and interests. But for five years, it went no further. We had a lot in common, but I felt strange putting myself out there to try and win over a new friend.

By the time I hired her as a freelancer for a work-related job, I had decided to go for it. How hard could it be to move a relationship from casual acquaintance to friend? Not hard once I accepted that my connection to Sue was what mattered, not our kids’ regard for each other. Although our daughters are close in age, they smile, nod, say hello to each other and leave it at that.

This “moms only” friendship offers an added benefit: Sue’s an unbiased sounding board. Having a friend whose children don’t socialize with mine means that I can be more candid and honest than if both daughters and mothers’ lives were intertwined. In the process, I figured out that being a good mother and being a good friend are very different things.

Motherhood is not an excuse to let go of old friendships because they take effort to maintain. Friendship is hard work. As my mother always told me while I was growing up, “New friends are silver, old friends are gold. Never exchange new friends for old.” I wish I’d listened to her advice and ignored the well-intentioned co-worker.

I’m popping that MGF (mommy girlfriends forever) bubble in favor of the following hard-won advice: If we want our children to form deep and lasting attachments, it’s up to us to model healthy friendships, let our kids choose whom they want to befriend without restrictions, and give ourselves the same leeway.

In short, don’t do anything differently in terms of making and keeping friends just because you’re a mom. Motherhood may change many things, but the true nature of friendship isn’t one of them. p

Linda Lowen works for for MSN.com and About.com, where she writes and edits the Women’s Issues site. She also teaches creative non-fiction writing at the Downtown Writer’s Center. She lives in Syracuse with her husband and is mother to two daughters and a mini schnauzer.