The Power of a Magic Wand 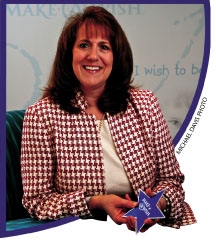 Diane Kuppermann has been making wishes come true for the past 20 years. As president and chief operating officer of the Make-a-Wish Foundation of Central New York, she has had a role in putting more than 1,200 children with serious health conditions in touch with the furthest reaches of their imaginations.

“I tell you, there is not a day that goes by that I don’t thank my lucky stars for having this job,” Kuppermann says. “I am so privileged to be with Make-a-Wish.”

Kuppermann, a native of Ogden, Utah, adopted Syracuse as her home in 1990, after meeting her husband, Brett, through family connections in the area. The couple now resides in Fayetteville with their two daughters—Leah, 14, and Elana, 17.

The Central New York chapter of Make-a-Wish was formed in 1985 and was initially run entirely by volunteers. When the chapter began assembling its first paid staff in 1992, Kuppermann sensed it would be a perfect fit.

“I still cannot believe it,” Kuppermann, 49, says. “I feel it was a little bit of luck and a case of being at the right place at the right time.”

Kuppermann studied psychology in college and worked briefly as a teacher before settling in the Syracuse area. She was working for the Downtown Committee, and she had been considering a career change—perhaps enrolling in nursing school. At Make-a-Wish, Kuppermann was able to pair her administrative skills with a commitment to community service. It was an irresistible combination.

“I feel so privileged to have this job and be part of an organization that is a catalyst for good,” she says.

The Make-a-Wish Foundation of CNY serves families from 15 counties. For some children, the wishes are grand—a trip overseas or meeting a favorite actor on location. Disney theme parks make up about 60 percent of wishes granted. Other wishes are more pragmatic. Bedroom makeovers have become quite popular.

Kuppermann recalls one little girl who wanted to be able to play outdoors. Treatment for her illness required her to stay out of the sun. Make-a-Wish was able to provide a covered playground that enabled her to be outdoors without further jeopardizing her health.

Most Make-a-Wish clients are referred by physicians or case workers. Kuppermann says the local chapter fills about 80 wishes for children ages 2 to 18 years old each year.

“We don’t approach families,” Kuppermann explains. “Sometimes there are families out there who could use our program but don’t call. We need to know we are being invited into a family’s life. Some people do have a perception that, because Make-a-Wish serves children with life-threatening medical conditions, it’s about death and dying. In fact, it’s about giving families hope.”

While there is no financial cap for the wishes, Kuppermann says the average expense for each is about $9,000. Roughly 82 percent of the revenue the chapter takes in through private and corporate donations goes toward program funding. “It’s so not about the money,” Kuppermann says. “It’s about experiencing the generosity of people in our community.”

The Syracuse community has been remarkably generous in its support of Make-a-Wish of CNY, she says. Partnerships with agencies such as the United Way of Central New York and the Jim and Juli Boeheim Foundation have enabled many wishes to come true. Sports teams and companies have donated thousands of game tickets and access passes to the organization. For a family in the midst of a battle with a serious illness, an afternoon football game can offer a much needed diversion. People have even donated unused airline miles to help offset some of the foundation’s travel costs.

Kuppermann admits that there are certain occupational hazards that come with a role like hers. Families referred to Make-a-Wish are often in one of the most difficult phases of their lives. But advances in patient care and in the treatment of illnesses such as childhood cancers mean that Kuppermann and her co-workers see many young people overcome their health challenges and move on to productive adult lives.

“Of course, there are stories that are beyond, beyond sad,” she says. “But there are more hopeful stories now than there used to be. Childhood leukemia has about a 95 percent cure rate now, which wasn’t the case when Make-a-Wish started.”

In fact, many former clients and families stay in touch. “Many of our former wish kids who survive their illnesses want to give something back,” Kuppermann says, adding that she and her colleagues have been the happy recipients of numerous wedding and birth announcements from former clients. One currently serves on the chapter’s board of trustees.

Interacting with families in the middle of emotional turmoil can be stressful. Kuppermann makes sure her co-workers are caring for themselves, too.

“It’s important to set some emotional boundaries when you’re doing this kind of work,” she says. “We’re not dealing with widgets here, we’re dealing with people. Every single kid (we help) has such a deep-seated impact on the volunteers and staff here. You are coming into families’ lives during what can be a very vulnerable time. Their grace, courage and strength are inconceivable to me at times.

“The kids have a way of remaining filled with hope and optimism,” Kuppermann observes. “They have given us many life lessons. It’s quite powerful: the impact on these wishes on all of us. You appreciate everything a little bit more.”

And of course, the wishes themselves have a positive influence on the children and families Make-a-Wish serves. The kids gain confidence in knowing that, despite their health struggles, they can still do things that other children do. Families relish the time together, away from a medical setting, and often report getting an emotional boost from the power of generosity. “We see good in the world every single day,” Kuppermann says.

Even during a brief conversation, Kuppermann easily summons numerous examples of the ways people have helped Make-a-Wish sustain its success. One suspects that Kuppermann’s powers of persuasion have had more than a little bit to do with it, too.

“When you’re in the business of making wishes come true, ‘No’ is not an option,” Kuppermann says with a laugh.

Award-winning writer Tammy DiDomenico lives in DeWitt with her husband and two sons.